RED CARPET RATS has undoubtedly been one of the music industry’s hardest-working bands. This Nashville-based rock collective wrote every song on their radio-friendly debut release, The Year Of The Rat. They also produced it, initiated a digital marketing campaign, formed and staffed its label, and acquired a major independent distributor.

“We kept everything in-house, pun intended,” explains frontman and lyricist Universo Pereira. “McCabe and I wrote all the songs together with two guitars and a laptop in my bedroom. Then we worked out the arrangements and rehearsed it with the band (bassist Doc Singles and drummer Tige Bucchino) until the elements were there.”

The group knew they were ahead of the game when they released their Rug Burns E.P. and received stellar reviews with airplay of all five songs on over 100 college radio and internet stations. Early versions of “Photographic Memory,” “Creepin’ In,” and “Written in the Scars” all reached #1 on Live365.com.

Their hard work culminated with their full-length CD, The Year Of The Rat, mixed by Grammy-winning engineer Kevin Beamish (Elton John) and mastered by Randy LeRoy (Tim McGraw). Universo and McCabe released the album on their label, Chauffeur Records, a full-service independent record label that they were able to sign to a subsidiary of Universal Music Group.

“Chauffeur Records is doing everything right,” according to New Music Weekly magazine. Viral marketing campaigns added songs from the record, which yielded a sponsorship with Old Navy and distribution on a compilation album at Hot Topic store locations nationwide.

Red Carpet Rats has proven that their sound has no boundaries, with two new singles charting on two different radio formats. “Photographic Memory” is heating up the airwaves of pop and alternative stations, and “Going to Hell,” with its harder, darker edge, has caught fire with multiple television placements and at rock stations across the country and elsewhere as evidence of its Top 10 status on WZIN 104.3 FM “The Buzz” internationally and sold-out tour of the Caribbean.

RCR has also crossed over into the Latin market, leading to a performance of their tequila-fueled anthem “The Gulp of Mexico” on Telemundo’s SpanishTV. Available on iTunes, The Year Of The Rat has been licensed to entertainment company Bunim/Murray Productions for its television shows on channels including E! Entertainment and Oxygen. Digital music network TouchTunes premiered and featured their record in over 60,000 venues across North America.

Red Carpet Rats has signed on as the official “spokesband” for the Tennessee chapter of Prevent Child Abuse America and is the sponsor of their own “Make Our Video” contest open only to students. The group is also joining Armed Forces Entertainment in touring overseas military bases. To borrow a line from the band’s ode to the grind, “Hard Living,”. . . Red Carpet Rats will surely keep busy “taking everything that life has to offer!” 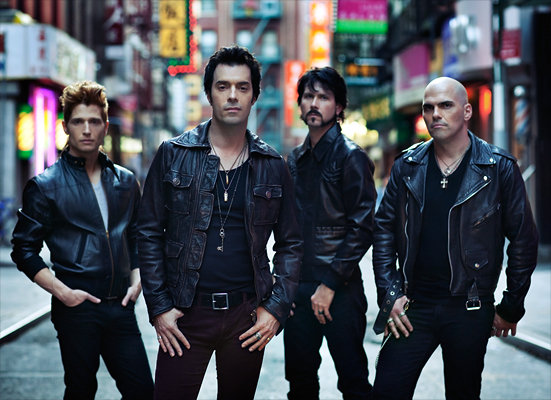 “RCR have a good tight sound with harmonies to match! Very worthy of airplay. If you like to rock, check them out!” – Staff Picks, Nashville Music Guide

“‘Photographic Memory’ is one of those fun songs with a great hook that gets stuck in your “MEMORY.” Began spinning the song on WRAL-HD and it grew from there. Looking forward to more Red Carpet Rats!” – Jim Kelly, WRAL 101.5 FM Raleigh, NC

. . catchy lyrics and harmonies combine in such a way that it captures the attention and leaves the audience thirsting for more. RCR has a sound unlike anyone on the airwaves today, which is exactly the kind of variety that the listening audience needs.” – Becka Grey, KLYD 98.9 FM Texas

“Red Carpet Rats are melody pounding rocksters who could be compared to U2 . . . their music has an ageless quality that will keep their music spinning constantly because it never gets old.” – Jonathan Lehmann, Station Manager, WPNR 90.7 New York

“They definitely ROCK! Our listeners in 40 countries and 138 U.S. Cities rate our tunes, and Red Carpet Rats continue to be one of our highest rated independent artists!” – AC Stewart, Programme Director, Spiderwebradio, live365.com

“You can put RCR in a time capsule and bury it…then dig it up in the year 2120…and the music would still be a hit! Yes, they are that good!” – Randall B. Jones COO / Editorial Director, Nine5Four The Magazine, Boca Raton, Florida

“Red Carpet Rats deliver hooky power pop and a cool vibe in their music that is not easy to find on the radio or anywhere these days. Undeniable talent, solid performance and catchy tunes make them a band to watch!” – Tom Beggs, Producer, Split TV – The Future of Music Television (ATL, NYC & LA)

“ . . . this band is more than the latest rock-pop group to hit the circuit. They are here with obvious ambition, a principle held up by sharp lyrics, memorable riffs and unparalleled style . . a prime example of what upcoming bands should strive to create.” – Richie Frieman, President, PensEyeView Magazine, Baltimore

“RCR’s a band that can truly play pop rock, with catchy beats and lyrics that we can all instantly connect to.” – Jo Wrigglesworth, Editor, Fusion Music Magazine, Melbourne, Australia